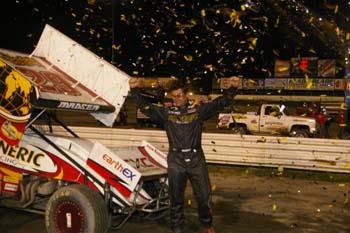 For the second time in the last three World of Outlaws Sprint Car Series events, Australian Kerry Madsen emerged in Victory Lane with a big smile on his face. On Monday, Madsen led all 30 laps to claim the inaugural Outlaws race at Willamette Speedway.

"We're definitely clicking and we're taking advantage of our opportunities," he said. "We've had some great draws. It looks easy when guys do that, but it's hard. You have to have everything right and get the opportunity, and then when the opportunity presents itself you have to seize it. It's hard to do with the World of Outlaws."

In the only World of Outlaws event this season in Oregon, Madsen outlasted Donny Schatz in a race that featured only two cautions, tough traffic and one angry Sammy Swindell.

After driving around polesitter Jonathan Allard for the lead to complete the first lap, Madsen entered traffic as he exited turn two on the sixth lap. However, by the time he was in turn three, the red flag was out following a collision between Allard and Swindell.

Battling for the runner-up position as they were going down the backstretch, Allard moved up the track and ran into Swindell's left front tire. It buckled and dug into the track, which forced a series of violent flips for Swindell.

"I was behind Kerry and didn't know Sammy was on the top," Allard said. "I went to go around the top because Kerry dropped to the bottom. (A) lapped car was in the middle. I made a move down the straightaway to go to the top to get some more speed up and Sammy was there."

While Swindell escaped the crash without injury, he was less than pleased and showed his frustration in what ended with a loud thud.

"He hit me with a rock when I was rolling around after that red (flag) right in the head, so a pretty poor sport," Allard said.

Madsen and Allard continued to run in the top two spots and they entered traffic on lap 12. However, Brenton Nugent's spin in turn three on the ensuing lap brought out the final caution of the race.

Schatz shot to second on the restart and Joey Saldana advanced from seventh to fourth in the first two turns. Traffic again began to play a role at lap 19 and Schatz chipped away at Madsen's advantage.

Madsen was able to hold off Schatz in the closing laps and a slide job in turn three to lap Henry Van Dam on the final lap was enough to secure Madsen's fifth victory of the season.

"When you know the World of Outlaws are behind you, you've just got to be on your game the whole way," Madsen said. "Mentally, they're tough races to win. To bring it home is fantastic."

Trey Starks earned the KSE Hard Charger Award after piloting from 20th to 12th. Swindell was credited with a 22nd-place result and Kraig Kinser, who ended in the wall in turn three on the final lap, finished 14th after running in the top 10 most of the feature.

NOTES - Willamette Speedway is the third track that the World of Outlaws has competed at for the first time ever this season. … Joey Saldana established a new track record and his ninth quick time of the season. … Lucas Wolfe claimed his fourth heat race win, Sammy Swindell his series-leading 17 th and Tim Kaeding his sixth of the season. … Jonathan Allard won his first dash of the year.

WE'RE ONLINE - Make sure to check out WorldofOutlaws.com for the latest news and results, plus exclusive driver interviews, video and pictures. Also listen to every event live at DIRTVision.com .