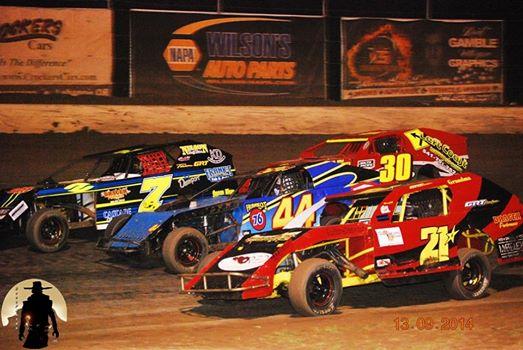 In the Wirth Wireless IMCA Modifieds it will no doubt come down to the final laps of the feature as Collen Winebarger and Craig Cassell are tied at the top of the points table but don’t count out Matt Mitchell who trails the two by a mere seventeen points as there is a slight possibility he could move to the top. Matt Mitchell and Jeremy Shank are the two drivers that have visited the winner’s circle three times each while Alex Stanford and Collen Winebarger have two victories. Single race winners include Jesse Williamson, Kyle Yeack, Craig Cassell, Dustin Cady, and Monte Bischoff.

In the Crocker’s Cars Super Sports it has been outright domination from the likes of Bricen James who enters the last race of the year with a two-hundred plus point advantage as well as nine trips to victory lane in just his first season in the division. Gil Pickett has three wins over Brian Thompson, Randy Barley, and Tim Archer who have one each.

In Albany & Eastern Railroad Sportsman action Brian Smith leads the class with the most wins this year with a total of four. Brian Winkler and Jeff Rash are both three-time winners while Ron Berry and Briley Pompe have done so twice. Single race winners include Steve Moore, James Slover, Sandy Sanders, and Jeff Marson. Brian Winkler is at the top of the point count and enters the final race with a healthy lead of approximately one-hundred points.

Bricen James also enters the last Street Stock event as the point leader with a one-hundred plus point advantage over Kyle Yeack. Yeack has recorded the most wins in the class, with four, while James and Justin Evans are three-time victors. Erik Jarnport and Ron Shinkle have one win apiece.

Last but not least in the 4-Cylinder division Dale Holland has been master of the class with his four victories. The only drivers to beat him are Bo Jones and Travis Koch.