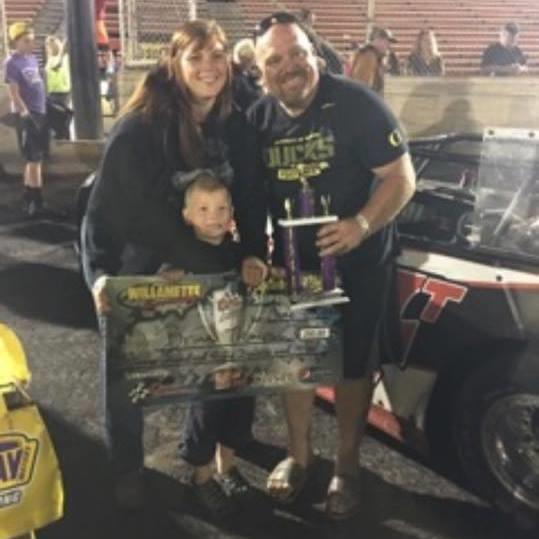 Kyle Yeack Wins Modified Madness 50; Thompson, T. Yeack, Horn, And Muse Also Earn Willamette Wins
By Ben Deatherage
(Photo Courtesy of Thompson Racing)
Lebanon, Oregon- Willamette Speedway would host some exciting action on Saturday June 25th. The IMCA Modifieds were the headliner of the card for the Modified Madness 50. In addition to the Mods the Super Sports, Sportsman, Street Stocks, and Hornets were also in attendance.

Monmouth’s Sam Potter would blaze the trail in the early goings of the fifty-lap IMCA Modified feature. He would be put under a bit of pressure by Kevin Roberts and the two would exchange the lead for several laps. Unfortunately, Potter and Roberts, of Gresham, would collect one another on lap eighteen.

This would give the lead to Matthew Drager from Albany. Drager would be very fast and looked for his second win of the year but a late race caution would bring about a fuel stop. On the ensuing restart Drager would continue to lead but before too long would be on the defense with Lebanon’s Kyle Yeack in pursuit. Yeack would make the pass for the top spot on lap forty and held on for the final ten laps to win his first IMCA Modified race of 2016 at Willamette.

Matthew Drager was second followed by Kevin Roberts, in third, after being involved in the aforementioned incident. Sam Potter would also work his way back into the top five and ended his evening in fourth while fifth finishing was Sean Mayea of Bend.

Despite only a few cautions early in the race Brian Thompson was the man to beat in the Super Sport main event. Thompson, from Sweet Home and alson running in his IMCA Modified, would take care of business and dominate the feature. It would Thompson’s third win of the current campaign.

Salem’s Chris Mott was second while Sean Cronk, from Portland, was third. Justin Dittman, of Albany and driving for Brian Winkler, managed to finish fourth and fellow Albany driver Randy Barley was fifth.

In the Sportsman main event it was all about Sandy Sanders, or so it would appear. The Junction City veteran dominated for much of the race but unfortunately on the white flag lap he would experience engine problems. Crawfordsville chauffeur Tom Yeack would be there to capitalize to seize the lead and capture his fourth feature win this year.

Sandy Sanders was able to finish second and Glen Hackney of Lebanon was third. Albany’s Todd Miller crossed the wire in fourth and Eric Lindquist of Portland completed the top five in fifth.

The Street Stock main event would be cautions galore. Despite the many stoppages the racing was fantastic. Jasper’s Andrew Langan led for the longest time until he was passed with five to go. Shannon Horn, of Mulino, was able to make the move. Horn would go on to pick up his first win of the season.

Kevin Roberts, also doing double duty, would end the night in second while Bend teenager McKenzie Lockhart got third. Chris Sine of Eugene crossed the wire fourth and behind him in fifth was Gresham teenager Talyn Roberts.

Last but not least the Hornets would not only have a good car count they would also produce an entertaining race. Despite starting towards the back of the field Tracy Muse of Jefferson would get to the front. He would be challenged in the final stages but held on to win for the fourth time in 2016.

Albany’s Rowe Lovvorn was the runner-up followed by Brad Moffett of Veneta. Don Briggs, in fourth, and Bill Sanford, in fifth, consisted of the rest of the top five finishers.

Willamette Speedway will be in action on Saturday July 2nd and July 3rd for the Clair Cup. Super Late Models, IMCA Modifieds, and Super Sports will be on the card for both nights while the Sportsman and Hornets will be in attendance on Saturday only and Sunday the Street Stocks will be back at the historic 1/3-mile clay oval.

Tickets for each event are $14.00 for Adults, Juniors/Seniors/Military $10.00, Youths $5.00, and a Family Pass (2 Adults and up to 4 Youths) $35.00. The times for both nights are Front Gates open at 3:30 PM and Racing kicks off at 6:00. Also don’t forget about the Tuesday July 5th Speedweek Northwest date which will feature some of the 360 Sprint Car drivers in the world. For more information, log on to www.trophymotorsports.com.