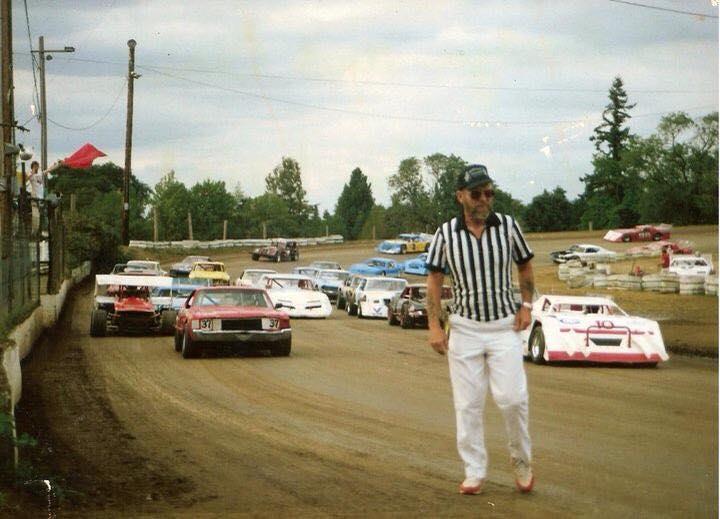 Clair Cup: A History
By Ben Deatherage
Lebanon, Oregon- The Willamette Speedway will have quite a busy weekend coming up with the annual Clair Cup on Saturday July 2nd and Sunday the 3rd. This will be the first time since 2011 that the event has been ran in the month of July.

Although the first Clair Cup was contested in July of 2010 as a tribute race in honor of Clair Arnold was held on Saturday April 25th shortly after his passing. Taking the lead on lap ten Justin Dittman would show the way the rest of the distance at the historic 1/3-mile clay oval. Putting a clinic on the high side of the race track, Dittman would win the race by half a lap. It would mark the first win at Willamette for both Justin and his car owners at the time Tom and Sherry Points.

“That night I missed the trophy dash and I remember Rob Mayea doing a Polish victory lap in honor of Clair,” commented Dittman, “that meant a lot to us drivers. I also remember sitting in staging for the main event and thought how cool it would be to win my first race on that night. The week before Russ Sell and I had a great battle for twenty laps and Russ won. I remember Clair coming up to me and saying how he wished I would have won. I told him I’d do it next week. And I did.”

In 2010 some big money was put on the line for the winner of the feature and was billed as the Clair H. Arnold Memorial. The race would have a wild finish as on the last lap of the eighty-one lap main event a crash would take out some top contenders in the backstretch. Three-time track champion and veteran Russ Sell would win the event when it was all said and done.

“That was a cool deal,” said Sell afterward, “That was probably the biggest win of my career. I remember that race was pretty exciting in the end. Clair was a big part of what made Willamette and I feel honored to have won a race in his memory.”

The 2011 edition would see another wild installment with several lead changes taking place. Lompoc, California's Mike Johnson, driving for Rob Mayea, would recover from an early race spin to get the lead around lap fifty-nine. Jeremy Shank would make the pass on lap sixty-five only to lose the lead to Johnson three laps later and Johnson going on to win the race.

2012 saw the race format change up a little bit as well as the name of the event which it is now known as, the Clair Cup. The racing had two separate shows with a bonus being offered up to a driver up to the challenge of winning both nights. The first night witnessed two heavy hitters duel one another for the win. Greg Walters and Rob Mayea put on a fantastic performance in front of a packed house with Mayea earning the triumph.

The next night 2010 winner Russ Sell would take the lead early but had some fast cars hot on his heels. A long green flag run put lapped traffic into the picture and gave an opportunity for both Jeremy Shank and Terry Ferrando to challenge for the lead. Sell would keep the challengers behind and would become the first, and thus far only, driver to win the final night more than once.

Unfortunately, the 2013 edition was completely rained out.

But both nights would be completed in 2014. Leading the entire distance of the first night was Scio veteran Steve Moore. There were several drivers trying to track down Moore for the lead but none of them could quite make enough of a challenge to make a pass. Moore was able to hold all challengers off and visit victory lane for the first time in Late Model competition at Willamette since September of 2011 at the Mick Gray Memorial.

Covering the field on night two was Portland’s Joey Tanner. After destroying a car the week before, Tanner, managed to take full advantage of his front row starting position to finally conquer the Clair Cup after coming so close in 2011.

2015 would see the first time ever a driver swept the Clair Cup weekend. Brian Cronk would take the lead on lap eleven in the first night and held on to win the feature. He would back it up the following night in exciting fashion after getting to the front in the closing stages of the main.

“To win the Clair Cup last year was definitely my most prestigious victories," commented Cronk, “Clair Arnold is the man that created the Willamette Speedway that we all enjoy so much so it was an amazing feeling to win "his" race.