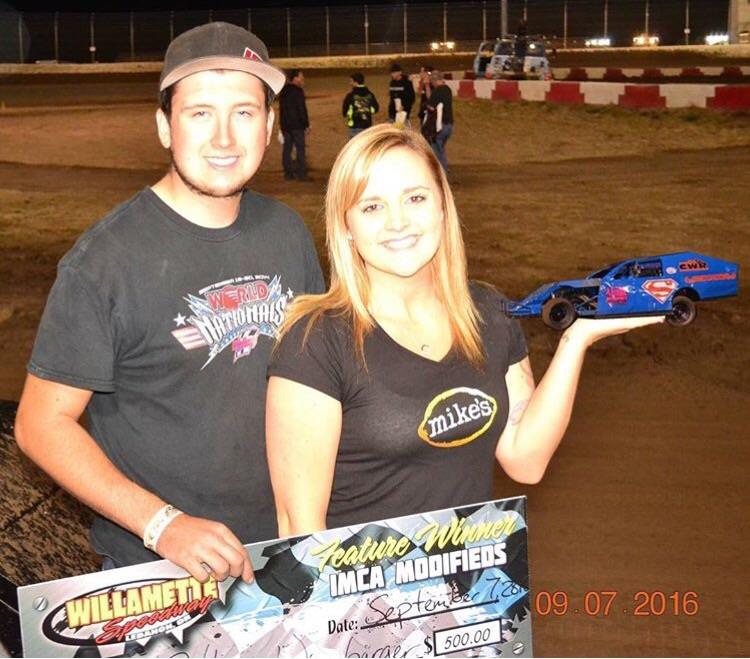 Collen Winebarger Wins Wednesday Willamette Show
By Ben Deatherage
(Photo Courtesy of Doc's Photos)
Lebanon, Oregon- With the Craftsman World of Outlaws Sprints in the house the Modifieds would be the support class on Wednesday, September at Willamette Speedway. It would be the third race in five days for the division at the 1/3-mile clay oval facility. A total of twenty-three entries from Oregon and Washington would make the trip.

In the main event, Brett James would get to the front on the opening lap. James, out of the Tangent area, would remain there until shortly after a lap four restart. Lebanon’s Justin Dittman would make the pass on the sixth circuit. Dittman was the guy to beat for some time before Collen Winebarger began reeling him in.

Winebarger, from Corbett, would obtain the top spot on lap twelve and began to take off. A caution with six laps to go would bunch up the entire field one last time. Dittman gave chase to try and get past Winebarger, but Winebarger started to pull away once again. Collen Winebarger would win the race recording his fourth Willamette Modified victory of 2016.

Justin Dittman ended his evening in second place while Albany’s Bricen James was the third-place finisher. Kevin Roberts, of Gresham, got fourth and completing the top five, in fifth, was Brett James.

Kevin Roberts was the fastest time in qualifications earlier in the night. Heat race winners included Albany’s Rod McCombs, Steve Moore of Scio, and Collen Winebarger. Rod McCombs got the job done in the consolation feature.

Saturday, September 10th will be a night off for Willamette but they will return to regular Saturday night action on the 17th for Thank A Farmer Night. That evening will have all six regular classes. Those include Super Late Models, Modifieds, Super Sports, Sportsman, Street Stocks, and Hornets. For more information, log on to wwwi.trophymotorsports.com.