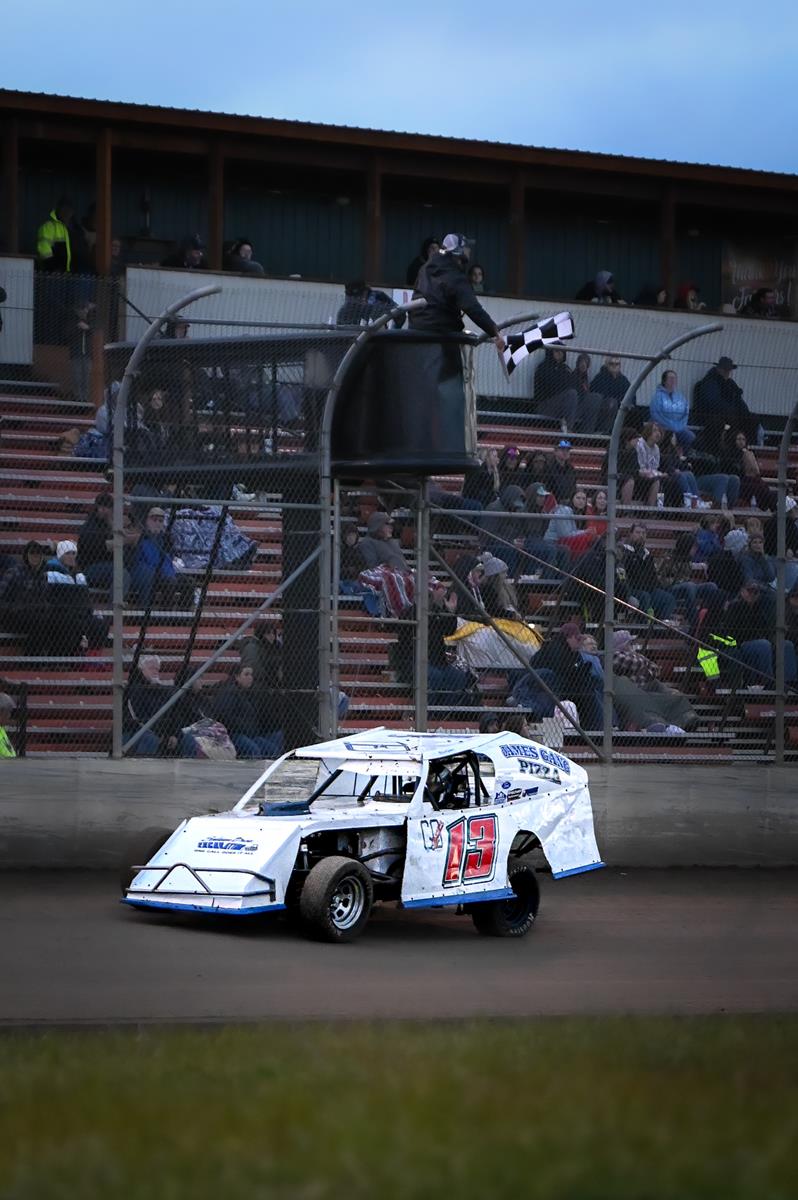 Willamette Speedway opened the 2022 racing season Saturday night with a few challenges and once again proved why the best race fans in the nation are from the Pacific Northwest. Facing questionable weather and temperatures, a large crowd waited out two rain showers and a hail storm to see the first night of action since last September.

Bill Arnold did a phenomenal job on track prep to give the racers a wicked fast surface on the fastest one-third mile in the west. Track officials sent cars out after the first shower to roll the track in and just as the surface was ready to start qualifying, the skies opened up again and shortly after a hail storm rolled over and unloaded on the facilty while the fans in the seats waited it out and the line at the gate continued to grow.

Once qualifying/hot laps got underway it didn't take long for things to heat up. IMCA Modifieds were chomping at the bit to challenge the wicked fast surface. They didn't just challenge it, the modifieds took advantage of the locked down surface and cold temperatures and made history. Bricen James got a wild chain of events set off when in his qualifying attempt as he set a new a track record for the division by besting the record that was held by Matthew Drager. Drager's track was 15.238 and James layed down a very fast 15.217.

Moments later Ian Whisler lowered that track record with an amazing 15.181 trip around the speedway. If that wasn't enough for the fans in attendance 14 year Eston Whisler, younger brother to Ian hit the track and smashed his track record with a time of an unheard of 14.769. The 14 year old driver becomes the first official driver to qualify in the fourteen second bracket and now gives all modified drivers a new standard to shoot for.

In the redraw for the modifieds held on the fronstretch, ten drivers would choose a sealed envelope with a numbered chip inside and have the choice of keeping it or trading with another driver prior to opening. Bricen James was the first to select and once all drivers had envelopes in hand the young veteran traded his envelope with Jeremiah Hester. Once the two drivers made the exchange James opened his for his official starting position and he held the number ten chip. Later in the redraw Hester opened his envelope and found the number one chip that would put him on the pole.

The modified feature saw lots of action all the way through a stacked field loaded with some fast company with the likes of Grey Ferrando, John Campos, Ian and Eston Whisler and Paul Culp. Everyone of those drivers were in real contention to win the feature at one point. Culp would lead early in the Superior Fuel Cells #42 machine, Campos was in a heated battled for the lead for several laps in the middle of the race and Ferrando put himself in the mix at one point. When it was said and done Bricen James drove from his tenth starting spot to claim the victory after a hard fought battle. IMCA Modifieds are back in action this Saturday night for their second race of schedule that will host them nearly twenty times in 2022.