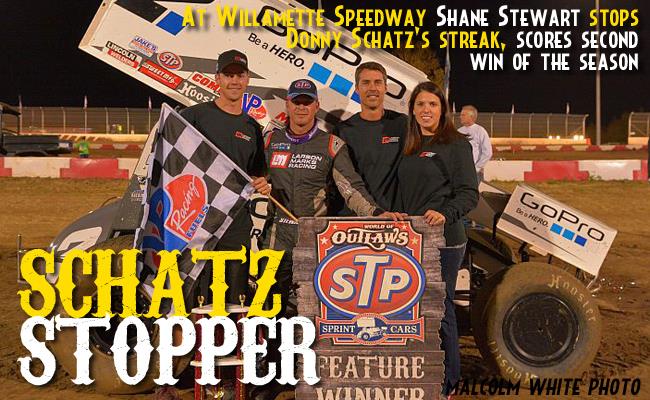 "I knew Donny was starting fourth and I knew the track was getting pretty slick - you just never can count the guy out," Stewart said. "He just does not make mistakes. I know personally it makes me and it makes my crew guys work even harder to beat him. I can't thank (my crew) enough."

This was Stewart's second points win with the Outlaws this season and third with the series overall. Earlier this season he won the Knight Before the Kings Royal at Eldora Speedway and the first qualifying night at Knoxville Raceway (a non-points event).

Stewart, who started on the outside pole, battled Saldana through the opening laps as Schatz moved into the top three following a red flag just as the green flag flew. Saldana first hit lapped traffic on lap five. As he worked his way through Stewart was able to close the gap in his Go Pro / Kick-It for Children's Cancer car.

"I knew Joey was going to be pretty good against the curb and sometimes leading you just don't know where to go," Stewart said. "We were able to get by him in lapped traffic and that caution actually helped me a lot getting out of lapped traffic. The car got pretty tight when you were getting behind cars against that big curb."

Saldana led the first 14 laps in his Motter Equipment car before Stewart took over the lead.

Farther back, a battle was underway between the reigning Outlaws champion Daryn Pittman and the current points leader, Schatz, for the third position. Like Stewart, Pittman was able to use lapped traffic to his advantage, eventually finding his way around Schatz on lap nine. Pittman then set his sights on the second.

As Saldana slipped back, Pittman caught and passed the 71M on lap 17, again using lapped traffic to his advantage.

A caution flag flew on lap 23 as Stewart led Pittman, Saldana, Schatz and McMahan. The restart that followed gave Saldana the shot he needed to retake his position in the top-three but Pittman was able to slide Saldana through turns three and four and maintain the position by the time the field made the first lap following the restart.

With laps winding down, Schatz too found his way around Saldana, retaking his position in the top-three. Stewart took the checkered flag and the win in the 30-lap A main.

"I've just got to thank Justin Marks and Kyle Larson, (co-owners of Larson Marks Racing) for believing in us," Stewart said. "We've been meshing lately and it feels good to be here."

For Pittman, this was his 38th top-five finish in his Great Clips car this season.

"I've got to take my hat off to my guys - Kale, Kolten and Carber," Pittman said of his Kasey Kahne Racing team. "We had a really solid night. We were really fast and we just made good changes all night long and that's all you can ask. We put ourselves in position to win a race. We had a great car. My crew guys did a great job watching the track and making really good smart decisions to keep up with the track."

Following the race, Schatz said he knew what he needed to do differently pull out the win. He said his Tony Stewart Racing team tried something a little different tonight but it did not work like they had hoped.

"We haven't made very many mistakes lately - tonight was one of those nights. I had a great car throughout the heat and the dash. I made up a lot of ground. In the feature I thought we had a really good chance but there were a couple of cars that were a little better.

While his win streak has come to an end, Schatz's 18 race podium finish streak that began on July 19 at Williams Grove Speedway continues after he finished in third.

"Hats off to this STP / Armor All team - they did a phenomenal job," Schatz said. "They worked as hard tonight as they have over the last 20 nights and we didn't win but we've got tomorrow night."

Paul McMahan set a new track record during qualifying after running a lap of 11.595.

Pittman made up a few points in the battle for the World of Outlaws championship, bringing his deficit to first place Schatz to 215 points. Third place McMahan sits 281 points out of the lead.

The World of Outlaws STP Sprint Car Series returns to action on Wednesday at Southern Oregon Speedway in Medford, Ore. before heading to California for a three race swing.

WILLAMETTE SPEEDWAY NOTES: Shane Stewart scored his second win of the season at Willamette… Donny Schatz's podium streak extended to 18 races… Donny Schatz, Cody Darrah and Joey Saldana all won their heat races Tuesday night… Paul McMahan scored his 10th quick time of the season, the second most of any driver… Paul McMahan set a new track record of 11.595… Kerry Madsen was the KSE Hard Charger Award recipient after advancing eight positions in the A main to finish in 12th.