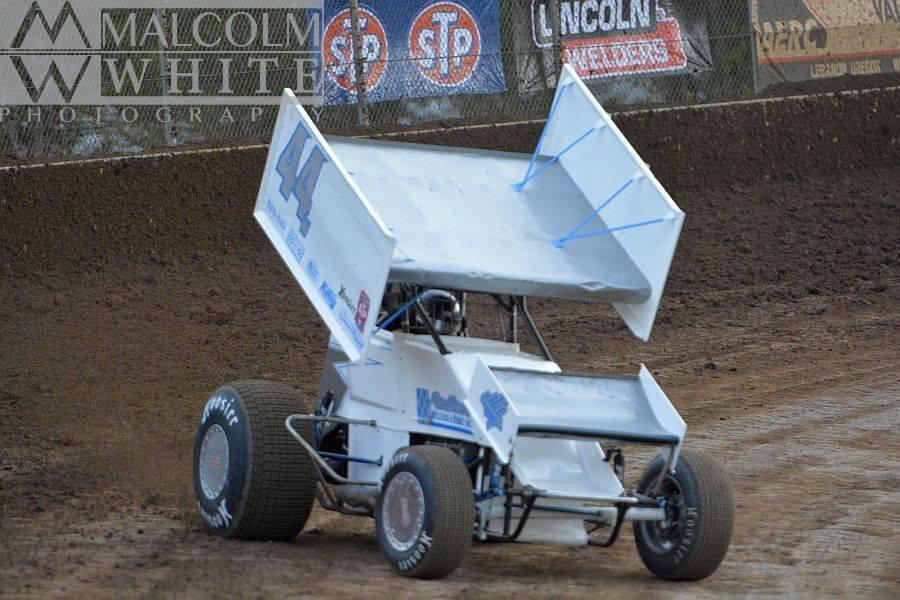 The action started a week ago Monday at Grays Harbor Raceway in Elma, Wash., where Wheatley qualified 16th quickest and finished where he started – sixth – in his heat race to lock himself into the main event.

“The car was pretty good,” he said after starting the feature 14th. “I got rolling around the top. I didn’t think it would slow down as much as it did in turns one and two. It was pretty good in turns three and four. We could maneuver on the bottom or top. I think we got up to 11th or 12th and I got pretty conservative and fell back a couple of spots.”

Wheatley ended with a 14th-place finish.

He ventured to Willamette Speedway in Lebanon, Ore., for a race last Tuesday. Wheatley timed in 18th quickest in qualifying and again placed sixth in his heat race to lock into the main event, which he started 18th.

“I couldn’t get a hold of anything in turns one and two,” he said. “When the pace slows down you have to slow down because that will rotate you. We were a little too tight on the right front and I needed more side bite.”

Wheatley was credited with a 16th-place result.

“It was real, real slick the whole time,” he said. “Hot laps, qualifying and the heat race were like an ice rink and then it was hooked up in the feature.”

Wheatley qualified 21st quickest and he placed seventh in his heat race before rallying from 21st to a 13th-place finish in the main event.

“We got up to 10th before a late restart, but we had a bar go bad and we lost our brakes,” he said. “Those things hurt us at the end.”

Following a day off to travel on Thursday, Wheatley wrapped up his weekend with the World of Outlaws at Silver Dollar Speedway for the two-day Gold Cup. It started last Friday with Wheatley qualifying 21st quickest and maneuvering from sixth to fifth place in his heat race. That locked him into the feature, which he started 19th.

“It felt like everyone was at the same pace in the feature,” he said. “I struggled with lane choice. It was kind of tricky. The curb was real big and it was slick on entry. We couldn’t get a hold of it.”

Wheatley ended the West Coast swing on Saturday at the quarter-mile track, where he timed in 25th quickest in qualifying. However, he ended eighth in his heat race, which relegated him to the Last Chance Showdown.

“I was behind Rico (Abreu) and cruising along with three or four laps to go,” he said. “Then I fell off the entry of turn one. I slid off the track. I restarted and got back up to sixth and I fell back off again in the same spot.”

Wheatley ended 10th in the Last Chance Showdown to miss a transfer.

“I think the story of the whole year is that the speed is there at the end of the night and I’m not on point from the start of the night,” he said. “I think it’s something good to build on for next year. I think we have some stuff we can try during our last few races to be ready for next year.”

Wheatley will have t-shirts and hoodies for sale at every race he competes at this season. For his schedule of races, visit http://www.AustenWheatley.com.

Downforce Designs is an apparel company established and operated by Austen Wheatley. For information on apparel options, prices, clientele and more, visit http://www.DownforceDesigns.com.

“It’s good to have a fresh take on apparel in the sport,” Wheatley said. “My goal is to provide something unique and diverse, and I think I know what a driver wants to see on his or her apparel. It’s a racer helping racers.”