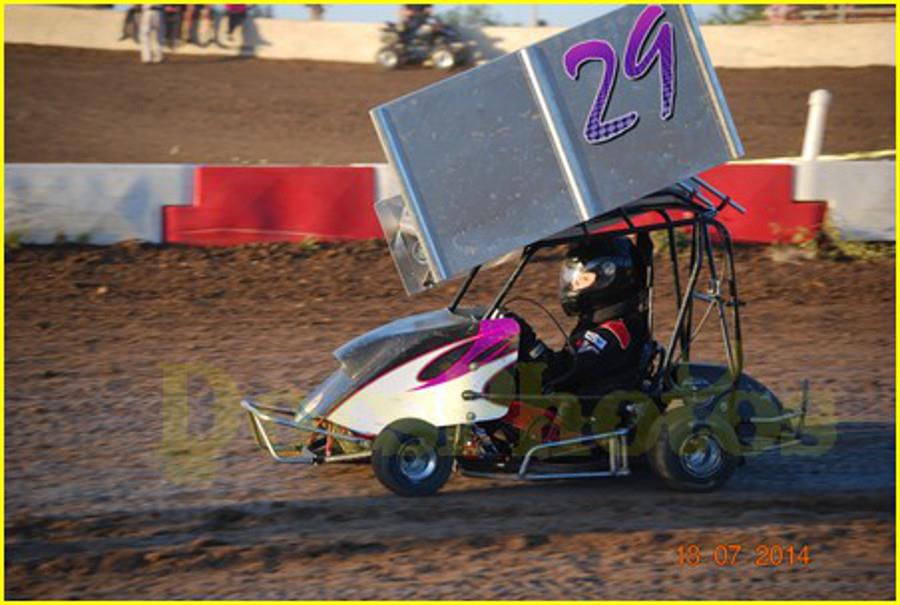 Karts Have Great Races To Wrap Up 2014 Willamette Season

Karts Have Great Races To Wrap Up 2014 Willamette Season
By Ben Deatherage
(Photo Courtesy of Doc’s Photos)
The 2014 Kart season at Willamette Speedway would come to a close on Friday September 19th. With most of the championships already decided there were a few still up in the air. The evening would once again put on some great racing action.

Jayden Trupp would continue his dominant ways in the Pee Wee division after collecting his ninth main event win in 2014. Trupp would also become the 2014 champion in the class after an extremely successful campaign in the Dave Foote Motorsports/Nexdor Tobacco & More/Trupp Family Race Team #72 QRC.

Carter Patterson of Albany was once again in victory lane in the 5HP Open division. It would be the seventh win of the campaign for Patterson and the James Gang Pizza/Clayton’s Cornwell Tools/Rebecca’s Barber Shop/King Office Equipment #47 QRC. Patterson also would win the championship in the division.

In the other 5HP class, the 5HP Intermediate, Kylee Day of Vancouver, Washington would score her first ever victory after only a handful of starts in her young career. Day, in her Discount Race Car Parts/Terry’s Drain Service #10D QRC, is one of the only drivers to defeat Cottage Grove’s Austin Sause all year long. Speaking of Austin Sause the pilot of the Wheeless Trailer Sales/Cooper’s Pest Control/Central Coast Vacuum/Umpqua Survival #7 QRC would be declared the champion.

Jerry Fonfara of Keizer would score his seventh main event of the season in his Fonfara Racing #88 Trackmagic. Finishing in second would be fellow Keizer native Jayden Kimball in his Bob’s O.K. Tire/G&S Machine #17 entry who would end up the title holder.

The 125cc division was one of the close point battles headed into the final leg. McKenzie Lockhart of Albany, in only her first year in Karts, would end up the victory in her Linn-Benton Insurance/James Gang Pizza/A.A. Towing #29 QRC. Conner Hanson of Creswell would win the point championship after Lebanon’s Kyle Roles, in his Knothole Market/Big Sky Landscaping/Clayton's Cornwell Tools/Scofield's Karts & Parts #02 QRC, would experience problems during the course of the night.

Conner Hanson would be second in his Hanson Contract Cutting/BC Motorsports/SKS Racing/DT Motorsports #55H QRC while third went to the Checkered Flag Paving & Sealcoating/Big Sky Landscaping/Scofield's Karts & Parts/E&L Motorsports #6A QRC of Clackamas chauffeur Dustin Asher. The rest of the top five would be made up of Albany’s Trinity Pendley in her Linn-Benton Insurance/James Gang Pizza/A.A. Towing #47 QRC in fourth while fifth was Tyler Pagel of Brightwood in his Pagel Trucking/Begg’s Tires & Wheel/Pagel Towing/C.A.’s Lift Truck Service #27 QRC.

In 250cc competition Kyle Cormican of Vancouver, Washington win his fourth race of the season in his Schram Brothers Excavating/RSR Racercraft/Xtreme Motorsports/James Gang Pizza #113 RFC. Unfortunately he would experience issues in heat race competition which resulting in him losing the title to Albany’s Eric Scofield.

Well that wraps another fantastic year of Kart action at Willamette. Be sure and stay tuned as far as the date and location for the 2014 awards banquet for Kart teams. We will promptly post on www.trophymotorsports.com any banquet info as well as any information pertaining to the 2015 season.