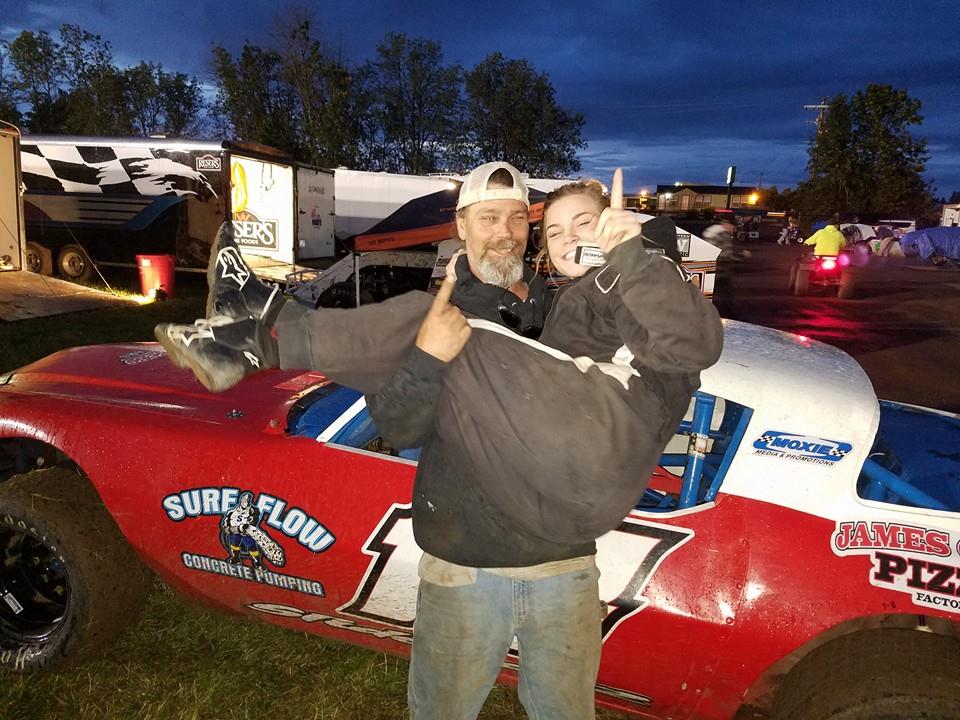 Willamette Street Stock Win Goes To Mikey Brakeall
By Ben Deatherage
(Photo Courtesy of Team Slidewayz Motorsports)
Lebanon, Oregon- As the Wild West Modified Shootout invaded Willamette Speedway on Wednesday June 15th the Street Stocks would be the support class for the evening. A total of ten cars would make the event with entries from the states of Oregon and Washington.

Portland’s Jody Tanner would seize the early race lead in the main event and looked to be on his way to his second win of the season. He would only possess the position until lap three when Lebanon teenager Mikey Brakeall made the pass underneath him in turns three and four.

Brakeall would remain in the coveted spot for the next few laps before the yellow would come out on lap five due to excessive rain on the track due to a late night shower that rolled in. The race would not get restarted and was officially declared completed with Brakeall winning her first career main event win.

Justin Evans of Albany was second while Lebanon’s J.J. Irvine was third. The balance of the top five would consist of Jefferson driver Loren Kruesi in fourth and fifth finishing Jody Tanner.

Earlier in the night Loren Kruesi would set quick time while the trophy dash was won by Justin Evans. Evans would also be victorious in the evening’s one and only heat race.

Willamette Speedway gets back to racing on Saturday June 18th for Firefighters Night Out. Classes on the card is the Wingless Sprint Series, Super Sports, Sportsman, and Hornets. Then Sunday the 19th is the 16th Annual Tuff Truck and Trash Car competition.

Tickets for each event are $14.00 for Adults, Juniors/Seniors/Military $10.00, Youths $5.00, and a Family Pass (2 Adults and up to 4 Youths) $35.00. The time for the races on Saturday night are Front Gates open at 3:30 PM and Racing kicks off at 6:30. The Sunday Tuff Truck and Trash Car event times are much earlier with Gates opening at 11:00 AM and action beginning around 1:00 PM. For more information log on to www.trophymotorsports.com.