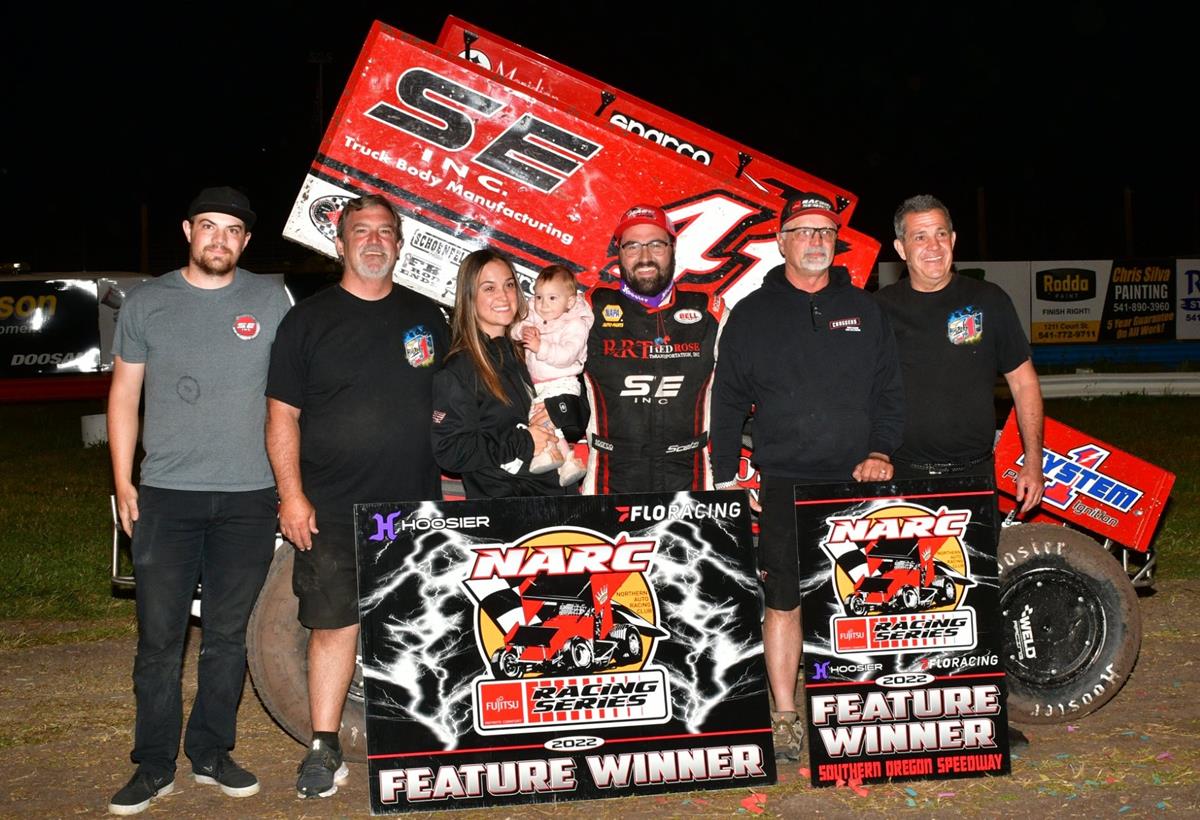 Inside Line Promotions – ELMA, Wash. (May 30, 2022) – Dominic Scelzi was on a mission last weekend during his first trip of the season to the Northwest.

Scelzi won the opening round of the miniature version of a speedweek before garnering runner-up results during the final two races to extend his lead in the King of the West-NARC Fujitsu Series championship standings.

“I’m extremely happy,” he said. “It was special to be able to get our first win in the state of Oregon. Now we’ve won along the entire West Coast in California, Oregon and Washington.”

The busy weekend began last Thursday at Southern Oregon Speedway in Medford, Ore., where Scelzi set quick time during qualifying. A third-place result in a heat race preceded a second-place showing in the dash, which gave Scelzi a front row starting spot for the feature.

“We went into Medford and set quick time, which was awesome,” he said. “It’s our second quick time of the year. Then we ran really well in the heat race and the dash. We ran second the first half of the feature before we started pressuring the leader. He got into the cushion the wrong way and it put him into the wall on the backstretch, which gave him a flat. That put us out front and we were able to go untouched the rest of the way.”

Scelzi led the final 11 laps en route to his first victory in the state of Oregon as well as his fourth straight with the series, which is the first time a driver has accomplished that feat since 1999.

“It’s a dream come true to put my name up there with a guy like Brent Kaeding,” he said. “He’s the most successful sprint car driver in California history. To do something he did 20-something years ago is very humbling and special.”

Round 2 of the weekend was Friday at Willamette Speedway in Lebanon, Ore. Scelzi timed in fourth quickest, finished second in a heat race and placed third in the dash. He then gained one position in the feature to earn a runner-up result.

“We were good all night,” he said. “The track was bottom dominant after qualifying, but we moved forward each time we were on the track. In the feature we fell to fourth, got to third, fell to fourth again and then got back to third. We were all over second place. On the last lap he tried to go above a lapped car and we snuck underneath him to end up second.”

Saturday’s event at Grays Harbor Raceway rained out, leaving the Timber Cup doubleheader with only one race held on Sunday.

“With Grays Harbor raining out we really wanted to go to Skagit on Saturday night,” Scelzi said. “By the time we got to Grays Harbor and with the way the weather looked we ran out of time. But we’re looking forward to going there in a month for Dirt Cup.”

Scelzi continued his efficient effort on Sunday, qualifying third quickest, winning a heat race, ending third in the dash and advancing forward a position to place second in the A Main at Grays Harbor Raceway.

“We were really good,” he said. “I felt we had good speed. I got to second and closed on Trey (Starks). I felt we were pretty even the first half of the race. I was able to work the bottom, but I wasn’t close enough to do anything with him. When we had a yellow halfway through I spun my tires and got a really bad restart. That dropped me back to fourth for a second. I got back to third and it took me the rest of the race to get back to second. By that time Trey was in another zip code. It was really cool to see him get the win. He’s extremely talented and one of the best drivers on the West Coast.”

The trio of podiums during the weekend kept Scelzi’s streak alive of recording a podium during each of the eight series races this season.

Based in Fresno, Calif., Whipple Superchargers manufactures superchargers for all types of cars. Whipple’s dedication to innovative thinking, hard work, attention to detail and outstanding product performance has led to a better, American made product for the performance industry. For more information, visit http://www.WhippleSuperchargers.com.

“Whipple Superchargers are known worldwide for their business,” Scelzi said. “My dad and Art Whipple are really good friends. He loves racing and when we decided to go sprint car racing he was a huge, huge factor in helping us get going.”